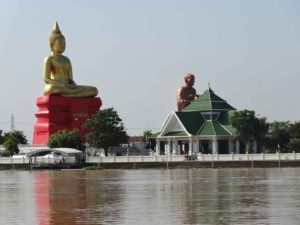 The original Wat Bote dates to 1621 and was constructed by a Mon ethnic minority group, whose members had migrated from Pegu or Hongsawadi town in Burma. The name of the temple was borrowed from the Mon people’s former home. A few years ago, the temple was fairly quiet, until they erected a huge statue of LuangpuThian (PhrakhruBowonthammakit), a highly revered senior monk; this attracted a large number of visitors and the temple more recently erected a 60 metre tall Buddha image, which further increased activity with many new structures. The wat is now a fine example of a contemporary Buddhist temple. Inside one of the temple halls are an ancient Mon-style Buddha image as well as a sword named PhraSaengAyasit, which is believed to hold great power.